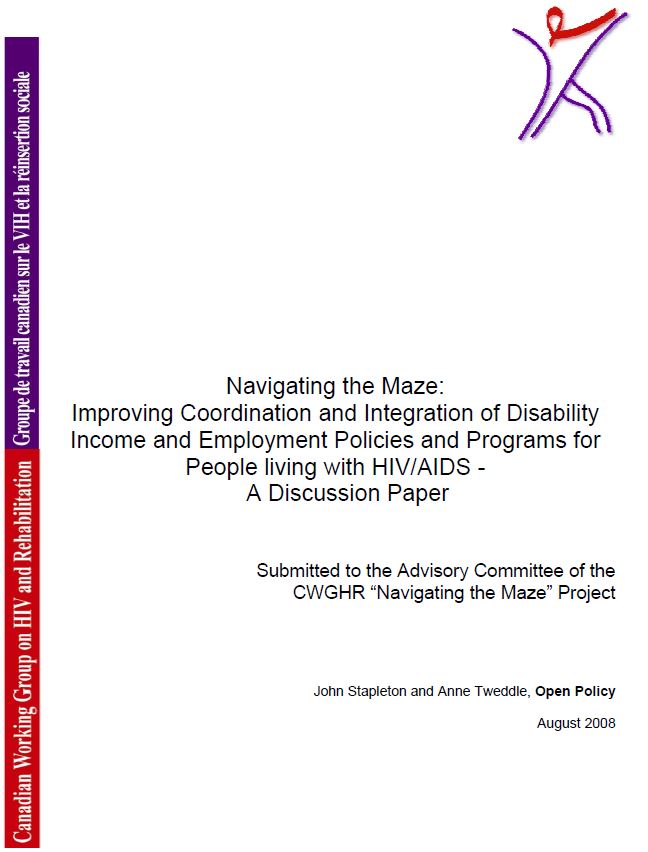 Navigating the Maze: Improving Coordination and Integration of Disability Income and Employment Policies and Programs for People Living with HIV/AIDS - A Discussion Paper (2008)

People with HIV/AIDS have an especially difficult time accessing and maintaining benefits from the various income supports available to Canadians with disabilities. This is due to the episodic nature of the illness. While its symptoms can be managed with medication, those living with HIV/AIDS experience severe fluctuations in their health, resulting in alternating episodes of illness and wellness. This can make it extremely difficult to pursue full-time work, which is why many Canadians with HIV/AIDS rely on disability income supports to meet their basic needs.

The overall goal of the Navigating the Maze project was to promote opportunities for labour force participation among people living with HIV/AIDS, primarily through security and continuity of needed supports. The Navigating the Maze initiative was primarily led by the Canadian Working Group on HIV and Rehabilitation (CWGHR) with funding from the Public Health Agency of Canada and contributing committee members from the Canadian HIV/AIDS Legal Network, the British Columbia Persons with AIDS Society, the Council of Canadians with Disabilities, the AIDS Committee of Toronto and the Federal/Provincial/Territorial Advisory Committee on AIDS. The initiative was active in the late 2000s, and published a report titled Navigating the Maze: Improving Coordination and Integration of Disability Income and Employment Policies and Programs for People Living with HIV/AIDS.